You can’t take the sky (or the dice) from me 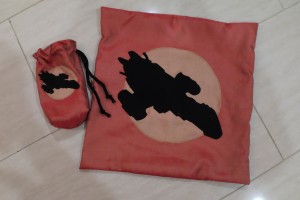 Tally might not be able to join us in person this year at Desert Bus for Hope but that doesn’t mean her presence isn’t felt.

We get to have a chat with Jer and Tally on stream today and to celebrate that we have this Firefly Dicebag and Cushion Cover.The cushion cover (actual cushion not included) is 14″x14″ and the drawstring bag stands 7″ tall. To celebrate the freedom of space we’re giving this away as a donation drive.

As an added bonus, to FILL this dice bag will be Jeremy’s HEAVILY used GenCon exclusive dice. Jeremy is also adding in his PERSONAL copy of Ghosts of Dragonspear Castle, a DnD 5th edition book that actually predates 5th Edition RELEASING.

Any donations of $8.25 or multples thereof until 6PM PST will enter you for a chance to win this lot!

Theme Song: Fade Away by Oasis

First Crush: Ashley Judd in that TNG episode, ‘The Game’ 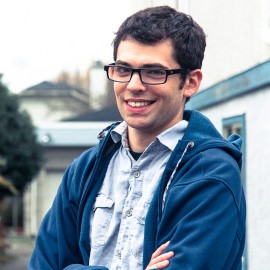 Running Quality Assurance at Metalab and Flow, streaming, dungeon mastering Temple of the Lava Bearsor buried in a book.

I am bad at everything, but I will try almost anything. I have sung and improvised songs, rapped, improved, played video games with my feet, dressed up like a sparkly vampire and created horrible games for our donors and my cohorts. I also designed the Desert Bus app (everyone drink).

He’s a total geek for:

Yes, I am one of the guys on episode 5 of the A Life Well Wasted podcast. How many people can say that they got to be on the best podcast ever? Sounds like a rhetorical question, but it’s probably around 20.

Biggest fear about driving for DB8:

That Rosco will end up like Samantha at the end of Her. He’s getting pretty smart—it could happen :O!

If he was reincarnated as a fruit or vegetable he would want to be:

A Jalapeno – so I can be super hot

Doesn’t want you to know he listens to:

Anything by Hoodie Allen

To prepare for driving the bus he is:

Preparing myself to spend hours making almost zero progress by grinding in Destiny.

What symbol does your superhero cape have on it?

A duck in front of a comet