You guys are amazing.

Once again, your generosity is unbelievable.

We thank you all from the bottoms of our hearts. Desert Bus for Hope is truly a community effort and none of this would be possible without every single one of you. You are the best community anyone could ask for.

If you want to help us make Desert Bus 8 even better, please consider taking a moment to complete our survey. (It’s short, I promise.)

LAST CHANCE TO GET
A DESERT BUS 7 POSTER!

Why not pick up one of our fantastic Desert Bus 7 posters? As every year, it is stupendously illustrated entirely by Michael Lunsford of Supernormal Step. 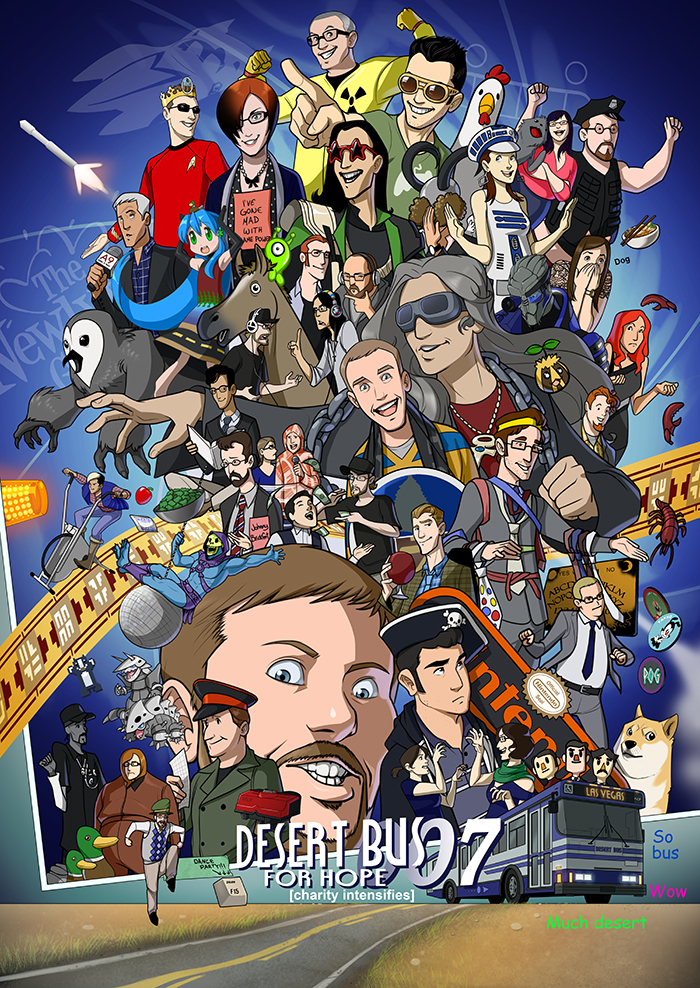 HURRY because the poster is ONLY AVAILABLE until Sunday, November 24 at 8pm PST!

As we wrap up, our Gallic friends at Desert Bus de l’Espoir are livestreaming their Desert Bus odyssey from the heart of France … get them on Twitter at #desertbusfr, check out their stream, and donate some Euros for the children! Bonne courage, camarades! 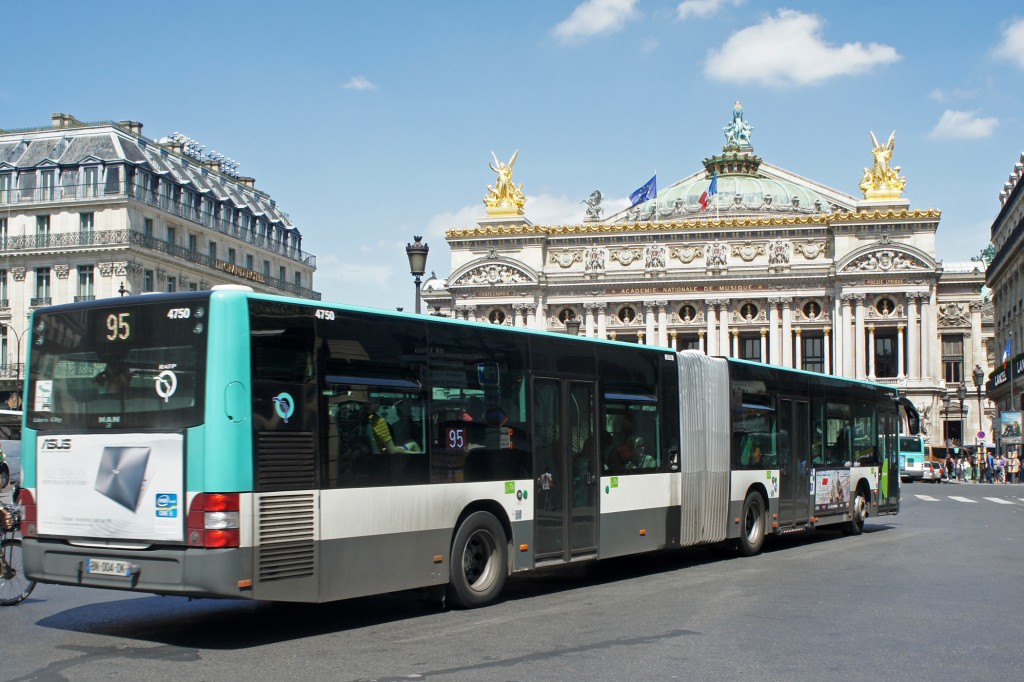 END_OF_DOCUMENT_TOKEN_TO_BE_REPLACED

Remember the Seven Dollar Superheroes we collected from our special guests over the course of Desert Bus 7? Did you know that some of the talent and volunteers added their own too?

Here’s the full list we came up with. Have a favorite? Let us know in the comments! And if you feel inspired to draw one, send it in to [email protected]! We’d love to see your creativity

Powers: Can create an overpass anywhere, anytime, to get him straight from where he is to where he wants to go.

END_OF_DOCUMENT_TOKEN_TO_BE_REPLACED 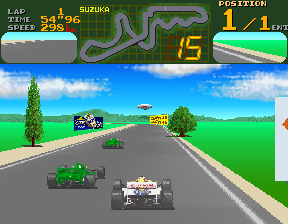 We’re within sight of the finish line, folks.

As I write this, we are at 154-and-one-half hours into about 155+1 of our Desert Bus marathon. It’s been a real privilege to be able to share this journey with you all week, and I am especially lucky to be able to blog you through the home stretch.

It’s been quite a week, with loads of unforgettable moments, and I have a feeling we might still have something special on tap for our grand finale.

What were some of your favorite memories — happy, funny, sad, or anything — from this year’s Desert Bus? Let us know in the comments!

What more can we say? Thanks you your amazing support, we have topped half a million dollars.

We’re up in the stratosphere now, well beyond any past any past Desert Bus, and still going strong, at least for a few more hours.

Paul alone has brought in over $100k on his shift alone! That’s more than Desert Bus 1 and 2  combined. The benefits of running anchor it seems. 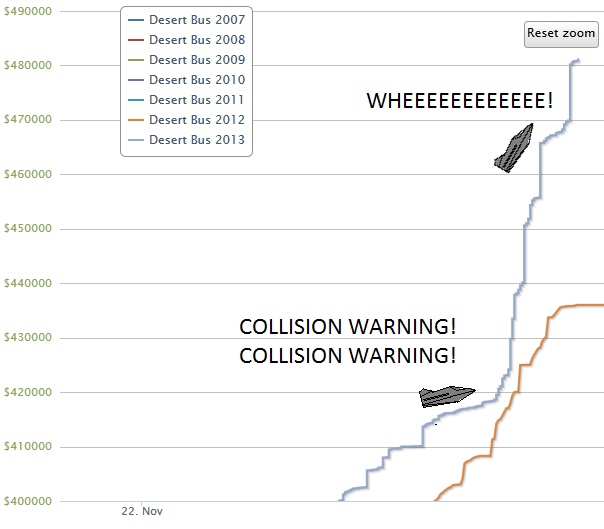 We have one last item to go under the hammer. 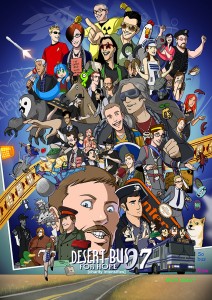 It is a jumbo (approximately 24″ × 36″) signed copy of the official DB7 poster, which comes with a certificate of authenticity.

Note that this item is a much larger version of the poster that is for sale in the LoadingReadyRun Store. 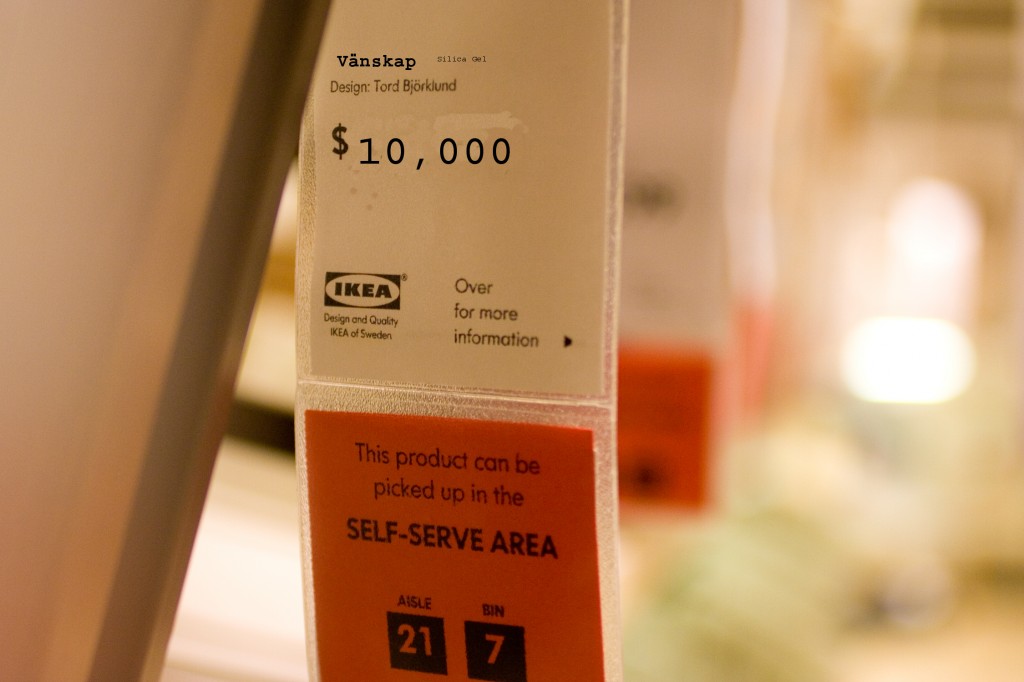 Honorary citizenships are a rare acclaim indeed. Only one Swede holds an honorary citizenship in Canada, and that is humanitarian Raoul Wallenberg, but we have to wonder whether our Governor General might consider another.

That would be none other than Markus “Notch” Persson, the mastermind behind the paradigm-shattering phenomenon that is Minecraft.

Notch, like his compatriots Mr. Wallenberg and Alfred Nobel, has ever been a friend to humanity. Perhaps never, however, has Mr. Persson’s philanthropy been more apparent than this evening when he donated a kingly sum of $10,000 (yes, ten thousand: a thousand ten times) for a… uh… pack of silica gel James found on the street?

Now, I know we all need H2O to live, but, still, I wonder if SiO2 might be my new favorite triatom.

I call it a “Troika“

For those who missed it, James (our ever-reliable leadoff driver) put on a masterclass in Desert Bussery.

No, your eyes are not deceiving you. That is James, with Van Cliburn-esque dexterity, hitting a treble by playing Desert Bus, Desert Bus 2600, and Desert Bus iOS, simultaneously.

Here indeed is a virtuoso at the height of his powers.

Including late submissions, we received a total of 49 entries in Paul’s lyric contest.

And the winner, which has since been sung live on Driver Cam, is… 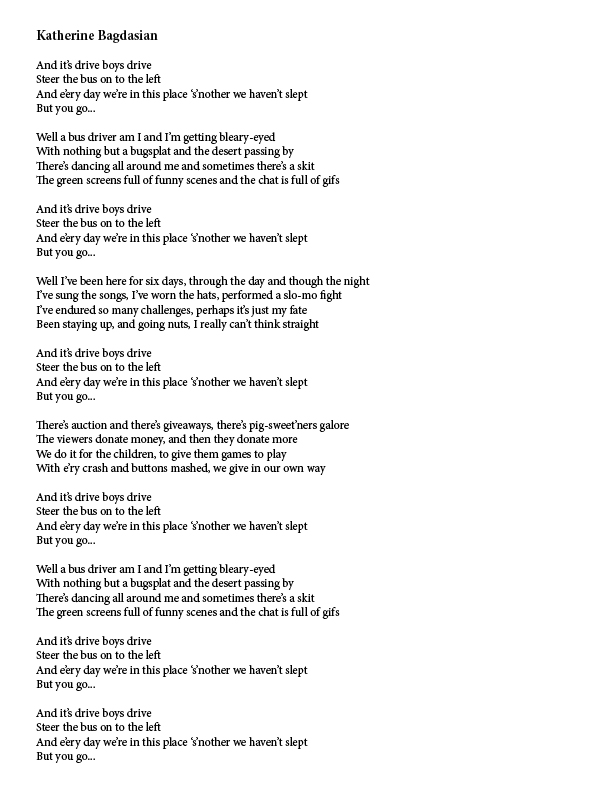 The other 48 entries follow. These were super good! Paul said judging was hard.

END_OF_DOCUMENT_TOKEN_TO_BE_REPLACED

How about another eleventh hour 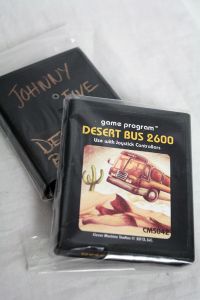 courtesy of the bods at Clever Machine Studios