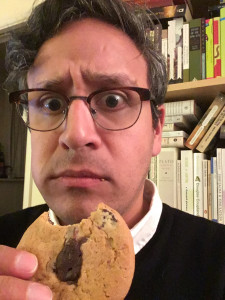 A Cameron occurs when several billion billion cells become intertwined and bound together by ice, gum, or hair. Also called Cell Kings, Camerons are sometimes frequently viewed as ill omens due to their association with plagues and filth.

Cameron occasionally communicates via short bursts of text on twitter @unarmedoracle and also streams from home at www.twitch.tv/unarmedoracle.

Check out the latest installment of Penn Jilette’s “Penn Says” vlog to watch him pitch Desert Bus hardcore. As one of Desert Bus’s co-creators, he knows full well the fury of the desert, and we truly appreciate his support.

While I realize it was a long weekend for those of you in the states, I’d hazard to say it was even longer for our drivers. Our ongoing torment will see reprieve today, however, when we receive a call from the beautiful and talented Felicia Day of The Guild, Buffy and Dr. Horrible. If you have questions you’d like us to ask Felicia, please post them here. We don’t promise to read all of them (see our previous Wil Wheaton call-in for reference), but we’ll certainly choose a few :).

Incoming Guest–Are You Ready To Rock?

Our Friend Sean Baptiste, community manager from Harmonix will be calling in around 3:00 pm. His company makes Rock Band, and surely you have questions for him. Personally, I want to know how long ’til we get Pinkerton for DLC.

What DO they play? Desert Bus!

Thanks again to John from What They Play for coming on and chatting with us . . . and for the link-in!

While John had little information on the mysterious EGM Desert Bus preview of 10 or so years ago, we’re interested to know more. Unfortunately, we don’t know the date or issue number . . . but if you have a copy and can somehow replicate it for us, we’d appreciate it a lot! [email protected]

Just wanted to give you a reminder that Desert Bus will be on The Zone tomorrow. If you’re up, there’s a strong possibility you’ll be tune in to 91.3FM and hear me on the The morning Zone with Dylan Willows and Jason Lamb. If you’re more of an afternoon type, then turn your radio on around 3, and listen for us on the afternoon show, with Jeremy Baker.

If you haven’t got a radio, or you live somewhere outside the range of the typical FM radio station based in Victoria, you can head on over to www.thezone.fm And listen via live streaming. Just click “Listen Live” and you’re good to go. That should help get your computer warmed up for the main event, too. Remember, we’re kicking off at 6PM.

Well, we’ve seen our first major link-in happen over the last couple days. This Article went up yesterday at suite101.com – and if you look carefully, you may note that it was written by our very own Tally Heilke!

It’s a great article, and I’d like to state my thanks to both Tally and suite101. com for their support.

Well, we’re 3 days out, and we’ve been teasing you like crazy about our “grand plans” for this year’s Desert Bus. I figured it might be time to give you all a taste of what you’re in for this year, and why you’ll want to stay glued to our feed for the duration of the event. Naturally, I can’t say too much – mostly because not everything is written in stone yet, but we can’t leave you in the dark forever. We have been networking all year, and have been working with the following people to ensure that this year’s Desert Bus is an event you won’t want to miss. Keep watching, and you may see involvement from:

Wil Wheaton, the cast of ‘The Guild’, Sean from Harmonix, the Joystiq Podcast’s Justin McElroy, John Davison of What They Play and 1Up Yours, Microsoft’s Major Nelson, Jeremy Baker of http://www.thezone.fm, and Sam Logan of Sam and Fuzzy.

Naturally, we’ve also been in contact with Penn&Teller this year – they were unbelievably supportive in 2007, and they’ve done everything in their power to support our plans for this year. So I wanted to thank them both for everything they’ve done to help us along.

If you live in victoria (or even if you don’t) tune into Jeremy Baker’s afternoon show on The Zone on Friday the 28th between 3pm and 4pm. Members of the LoadingReadyRun cast will be on the air promoting Desert Bus and talking to Jeremy Baker about our event. If you want to listen, you can tune in to 91.3 FM (in Victoria) or you can stream live over the internet from thezone.fm.

Have a great week, everyone, and I’ll feed you a few more details as the start time draws nearer!

Here we are. It’s mid November, and Desert Bus 2 is just on the horizon. I’d like to appologize for leaving the announcement so late this year. We encountered a number of complications over the last couple of months, and we weren’t able to finalize the details until last night. We’re scrambling a bit to pull things together, but rest assured, Desert bus is happening, and it’s going to be even better than last year.

First off, as you’ve probably seen in the announcement posts, it’s going to begin at 6:00PM on Friday November 28th. It’s Thanksgiving weekend for the yankees, I know, but hopefully you can find time to fit us in between the turkey and the pumpkin pie, or somewhere in between the pie and the requisite midnight turkey sandwich. At the very least, you’ll presumably be home with your families, rather than out at work, so may I suggest you take the opportunity to introduce them to LoadingReadyRun, and get them in on the Desert Bussing action?

The second thing to know is that we’ll be running from Victoria, BC again this year, although we have a location other than Bill and Morgan’s living room. If you live in Victoria, keep an eye out, I’m sure there will be opportunities presented to meet the team or prticipate in a more direct way than simply watching the feeds.

We’ve also finalized our roster of drivers for this year! Returning to the driver’s seat are James, Bill, and Morgan. I’d have thought that they’d learned their lesson last year, but I guess I was wrong. Paul has been dropped from the lineup this year so that he can direct his focus to the technical elements – the stream, recording elements of the event, lighting, audio, the chatroom, and so on. We’re hoping to have things go a little more smoothly in the technical area this year, and we think freeing Paul up to handle it was the right move. Replacing Paul in the lineup this year is our very own Jeremy Petter. I think he’s pretty excited about taking the wheel this year, so I hope you’ll all be out in force to support him as he drives his legs of the trip. Graham and Kathleen are taking the roles of official pit crew this year, they’ll be ever present at the driver’s sides, supporting them and the audience in whatever capacity they require. And if you haven’t figured it out already, I’ll be handling the communications. I’ll be your main point of contact whenever I’m around (which should be essentially all the time). I’ll be handling the blog, updates, running the twitter feed, and moderating the IRC channel. additionally, I’ll be frequently checking e-mail, and keeping you up to date on dollar totals, and special events. You’ll be able to contact me in a wide variety of ways over the course of event, and if you have any questions, or comments, feel free to direct them to [email protected], or [email protected] . I’ll be checking both regularly.

As you can see, Paul has just launched the new, improved Desertbus.org , so check the site periodically, and see what’s up. We have a lot of plans for this year’s drive. Some of those plans we’ve finalized, others we’re still pulling together. I’ll be filling you in with more information as it becomes available, so make sure you’re following one of our many information streams, either the twitter, the announcement thread in the forum, the blog, or here, at www.desertbus.org .

We’ll see you on the open road!