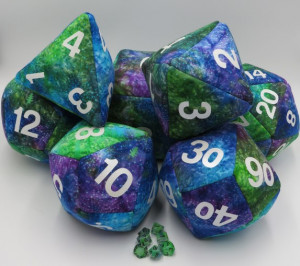 A full DnD set of plush, rollable dice! Have you ever just needed a die for the *big* rolls? Ever just wanted to completely dominate the playing table? Or use the entire room as your dice tray? Safely throw the dice when they fail you? Well this is the set for you!
Made using cotton batiks, fusible foam, polyfil and a little bit of geometry, this set is designed to actually roll!
Dice measure between 5″and 7″ inches (12-18cm) in diameter. Numbers are heat applied vinyl, so safe around munchkins. Regular dice set is from MDG, fresh from PAX West
Finally, you can have a loveable, hugable, crit success!
Sign up for or log in to your Donor Account, then donate $6.20 (or multiples thereof) for a chance to win this prize. We’ll run this giveaway until 5:30am PST.
Tags: dungeons and dragons, Giveaway, Zeta Shift
Comments (0) 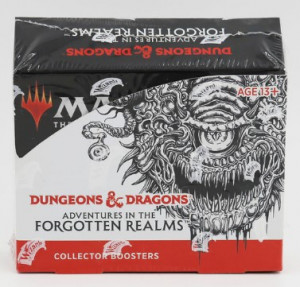 For the first time Magic crosses over with Dungeons and Dragons with Adventures in the Forgotten Realms. This crossover expansion takes you to the continent of Faerûn where you can venture into dungeons for treasure, roll dice to determine the outcome of spells and abilities, and adventure with iconic D&D characters like Drizzt Do’Urden and Minsc and Boo! This collector booster display contains twelve fifteen card collector booster packs. These packs are not intended to be drafted and are filled with goodies like foil cards, showcase and borderless cards, and an extended art rare or mythic.

Sign up for or log in to your Donor Account, then donate $6.20 (or multiples thereof) for a chance to win this prize. We’ll run this giveaway until 5:40am PST.

Tags: dungeons and dragons, Giveaway, Wizards of the Coast
Comments (0) 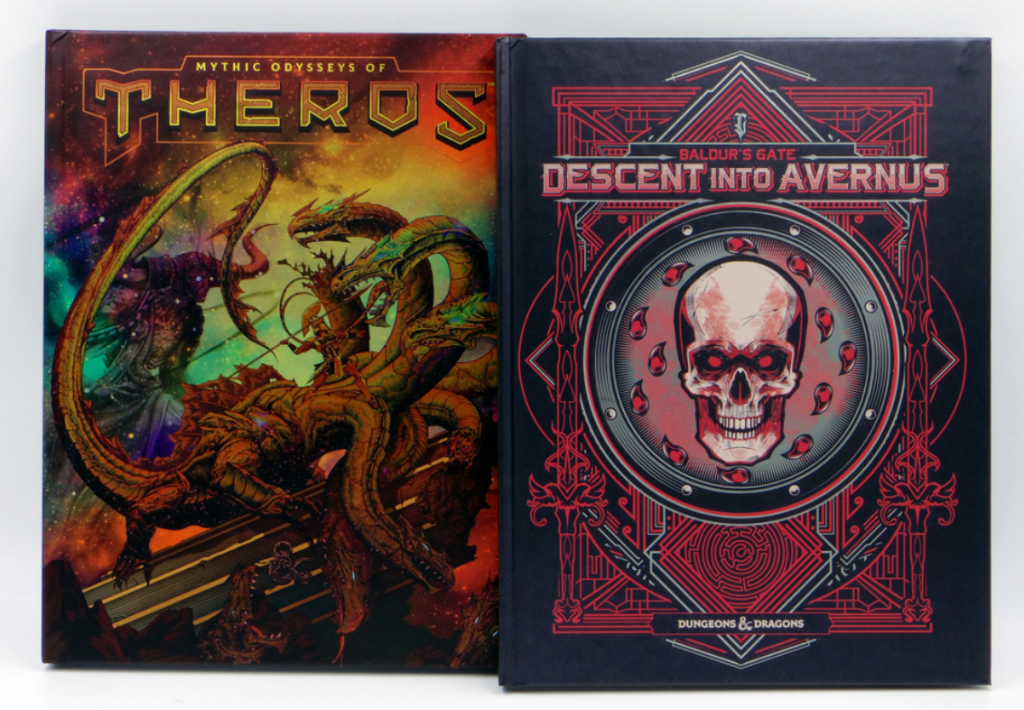 Imagine the look on your players’ faces when you peer over the DM screen, and grin as you tell them, “And that’s when you all went to hell.” Maybe you want to bring some Magic flavour into your D&D campaign, or just really like playing with hydras and Greek inspired mythology? We’ve got you covered with this fantastic lot of D&D books including Mythic Odysseys of Theros, and Descent Into Avernus, both featuring the alternate cover art for extra pizazz. Just imagine the places you will go and monsters you will slay once you have your hands on this prize lot, generously donated by Wizards of the Coast.

To enter this giveaway, donate $8.76, or positive multiple integers thereof, from now until 3am PST for a chance to win! As always, please make sure that your donor account is set up, and ready to go, so that we can shout you out on the stream! 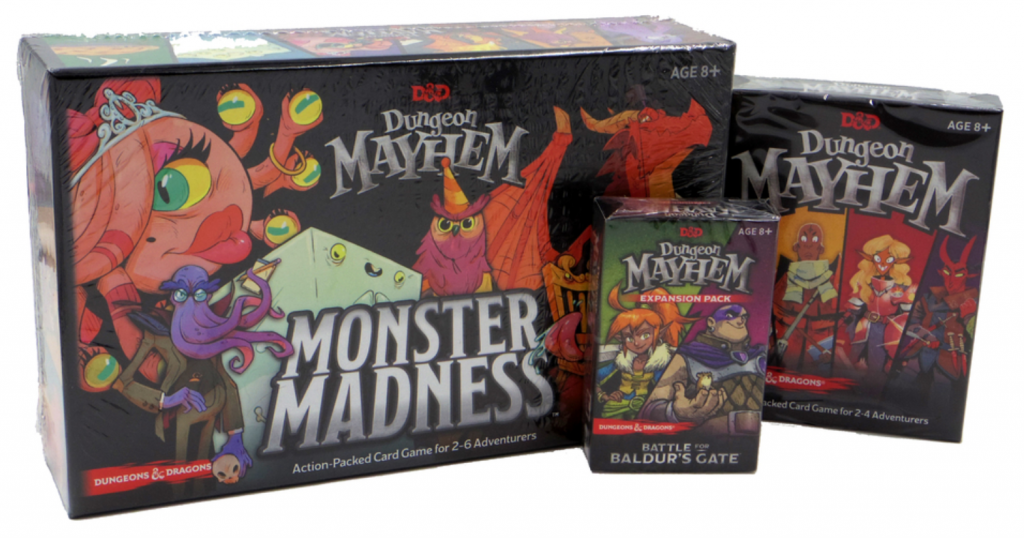 From our close, personal friends at Wizards of the Coast, this is the Dungeon Mayhem prize pack. In it is the base game, Dungeon Mayhem, as well as the expansions Battle for Baldur’s Gate and Monster Madness. In Dungeon Mayhem, you play as one of four adventurers, barbarian, rogue. paladin, or wizard, all battling it out to get the lion’s share of the loot your party just found. Each character has their own abilities and card deck to use to gain the upper hand. Battle for Baldur’s Gate adds two new adventurers, the ranger Minsc and the druid Jaheira, as well as a new battle to undertake.

In Monster Madness, things get a little twisted. Instead of playing as heroes, you and your friends now play as monsters trying to defeat the heroes from the previous games. With this, you can finally live your best Beholder life. We here at Desert Bus don’t judge.

To enter this giveaway, donate $7.99, or positive multiple integers thereof, from now until 5:40am PST for a chance to enter! As always, make sure your donor account is set up and up to date so we can scream your name into the night if you win! 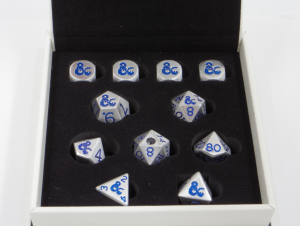 We’ve all had that friend who always has the nicest dice. If you win these beautiful Dungeons and Dragons 45th anniversary dice, you will be that friend, and it will be everyone else’s turn to feel dice envy.

It’s been 5 years since D&D5e; was released, as well as 45 years of D&D in general! In celebration of this, Wizards of the Coast has released a beautiful complete set of precision dice made from anodized luxury aluminum and a shiny blue coloring on the numbers, as well as one of the d20s that has an inlaid lab-grown sapphire in place of the 20. Not only that but the whole set comes in an exclusive custom dice box and dice tray combo, and so many more little treasures! The D&D Sapphire Anniversary Dice Set is a fantastic way to commemorate forty-five years of lasting friendships fueled by stories of imagination and adventure.

To enter this giveaway, donate $7.45, or positive multiple integers thereof, from now until 3am PST! That’s right, y’all, this is a long one, so plenty of time to get those donations in! As always, please make sure that your donor account is set up and up to date, so that we can shout you out when you win.

In all of tonight’s excitement, it’s easy to forget that we still have open silent auctions! Check them out below: 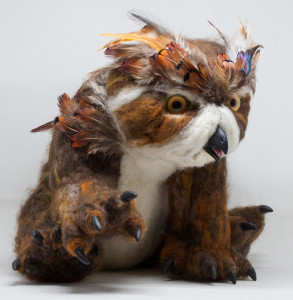 For the discerning adventurer or arch-villain, we have this feisty young Needle Felted Owlbear Cub. Perfect for your home, office, or volcanic doom fortress, this deceptively cute cub/chick is sitting at $1475.

Get ready to be everyone’s favorite person on public transportation with The Desert Mandolin, ideally suited to serenading your fellow travelers on an eight-hour bus ride. Made from birch and walnut with brass accents, this pine-shaped delight is currently going for $2420.69.

These auctions will close at 12:00AM PST!

Start playing Dungeons & Dragons with your friends, wherever they may be in the world! 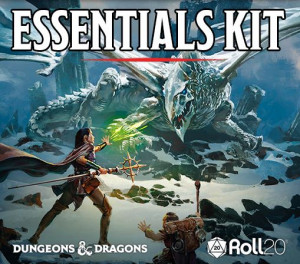 Note: this product is digital only.

We’re closing out Night Watch with our final Donation Drive, this time for these beautifully bound bundle of Dungeons and Dragons books!

The door to the captain’s cabin creaks in protest as you push it open. The abandoned ship sways and groans as you splash through the ankle deep salt water in the cabin. Most of the furnishings appear to be ruined, but your eye is drawn to a large locked chest at the foot of the bunk. The 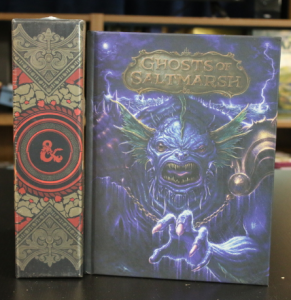 party rogue makes quick work of the lock and throws open the lid. Most of the contents are ruined but a set of black-bound books catches your eye. These volumes have curious titles like Player’s Handbook, Monster Manual, Dungeon Master’s Guide, and Ghosts of Saltmarsh. You can tell that they are special, rare editions of these books. You quickly shove the books in your Bag of Holding. As you turn to leave you find your way blocked by the animated skeleton of the infamous pirate Captain Red Beard! Roll for initiative.

Donate $6.55 (or multiples thereof) until 11:30pm PST for a chance to win these beautiful books! 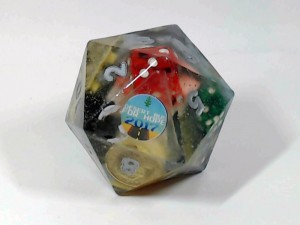 Quick, roll initiative! For a roving donation drive has appeared – with a chance to win a Desert Bus-themed D20. With this, you can have the spirit of Desert Bus for Hope with you at all of your gaming sessions, be it D&D, MTG, or when you need to settle a conundrum with a bit of random luck.

Donate $5.20 (or multiples thereof) for a chance to win this prize. We’ll run this donation drive until 5:20am PST.

Sponsor Thank You: Wizards of the Coast

Wizards of the Coast is a company that hardly needs introduction. They are the force behind titanic fantasy franchises Magic: The Gathering and Dungeons & Dragons.

Tags: dungeons and dragons, Magic the Gathering, Sponsor Thank you, Wizards of the Coast
Comments (0)