For one golden, glorious moment, Team Order achieved their ultimate limit break: seven sevens, or $7,777,777 earned across Desert Bus history. But for the rest of the evening on Night Watch, Chaos reigned. 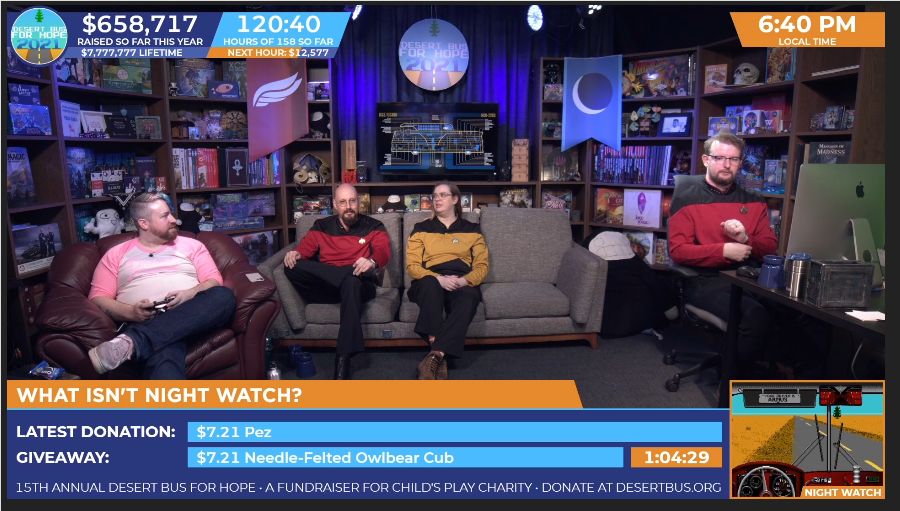 Ambassador “Andrew” Rae Jepsen seemed strangely perturbed to find out that he’s not the only ambassador aboard. Apparently nobody told him that the mission of the USS Tucson is to boldly shuttle ambassadors across a barren stretch of space! But many ambassadors and otherworldly beings joined us tonight.

For starters, our perpetually lost Ensign Ben has apparently morphed into a being called ZorBen and he’s recruiting Night Watch to help the children.

We got a return visit from Ambassador Joe, who was kind enough to help drive the bus for a bit.

Then a being calling himself Skeletor invaded our bridge BUT FORGOT TO TURN ON HIS MIC.

Even Harry the Creepy Doll, who has always been here silently watching, took inspiration from all these visitors to throw an impromptu dance party. It was… viscerally disturbing.

Naturally, we attempted to report all these strange visitations to Starfleet Command. Our call went straight to an automated answering machine apparently called What the Dub, but we waded through multiple sci fi clips with great patience. When we finally got a real person on the line, they told us “Sir, this is a Wendy’s.” No wonder Command hasn’t been answering our hails!

So we guess we’ll just go back to watching TikToks and eating from dump trucks.