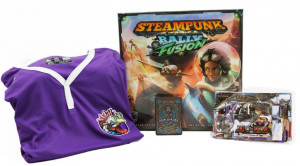 The scientists at Roxley Games have been working on some new inventions for your board game library. This prize pack of creations from Roxley Games features one of their latest releases: Steampunk Rally Fusion.

Not enough? Turbo-charge your racing with the Steampunk Rally Fusion Promo Pack, which adds 10 additional racers and 2 spoiler machine parts to the fray.

To top all that off, Roxley is also throwing in a deck of the beautifully designed Iron Spades playing cards and comfy purple Roxley Jersey, so you can show up at your next board game night ready to play. Ready… set… build!

Sign up for or log in to your Donor Account, then donate $8.69 (or multiples thereof) for a chance to win this prize. We’ll run this giveaway until 2am PST.

A giant thank you to one of our generous prize sponsors, Roxley Games Laboratory!

Roxley Games specializes in games that are innovative, well-developed, and highly-polished. At Roxley, they pour their heart and soul into every game they have the opportunity to work on. Some board games you might have played recently that they’ve published include Dice Throne, Santorini, Brass: Lancashire, and Gorilla Marketing.

Thank you Roxley Game Laboratory for your support of this year’s Desert Bus for Hope!

We welcome a new sponsor to Desert Bus for Hope this year, Roxley Games Laboratory.

Roxley Games Laboratory are board game makers who specialize in games that are innovative. Whether it’s a new theme or a new mechanism, they strive to bring something different to the market under their band. They are the makers of titles such as Santorini, Steampunk Rally, and Super Motherload.

Thank you Roxley Games Laboratory for you support of Desert Bus 10.