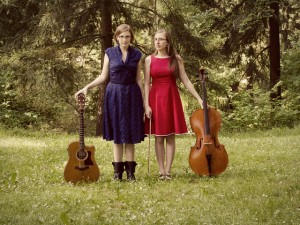 The Doubleclicks will be calling into Desert Bus at 3pm PST on Monday, November 17th.

Angela and Aubrey Webber are sisters who started their Youtube channel in 2011 with a song-a-week project that went on for 6 months. Since then the duo has continued releasing songs on Youtube and CD with songs such as “Nothing to Prove“, “Cats and Netflix“, and “Love You Like A Burrito“.

Just before the Doubleclicks were guests on the show TableTop in Feb 2014, they challenged themselves to write a song about TableTop in which they named all the games that had been played up until that point. They also wrote and performed a song for a LoadingReadyRun video called “Four PS4s“.

Angela plays the guitar, ukulele, and keyboard cat. Aubrey plays the cello. Known for writing songs that emphasize geeky topics they are found performing at conventions, events such as W00tstock, comic shops, game stores, and online.

In 2014 they ran a Kickstarter campaign to raise funds for their latest album, Dimetrodon and 5 weeks of weekly songs. The campaign was funded by more than 4 times what they asked for. This overfunding unlocked additional weeks of weekly songs, the ability for them to purchase new video gear and gave Aubrey the chance to quit her day job so she could work on music full time!

Have a question for The Doubleclicks? Leave them in the comments below!