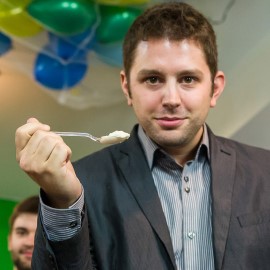 When not at Desert Bus, he can be found:
As the 6th most important member of LoadingReadyRun, James can be found honing his trombone tossing skills every Monday, Wednesday and Friday on trombonetoss.com.

Special Skills:
My ability to drive the bus and not crash while partaking in any challenge, wether it be of the mind or body, is unmatched. I’ll sing (poorly) dance (with no sense of rhythm) and act (you’ve seen me act, it’s not good) while driving, and driving well.

He’s a total geek for:
I like Magic the Gathering. Playing MtG, Watching MtG, Reading about MtG, Streaming MtG, Talking about MtG, Going to MtG Events.

Claim to Fame:
With 99.9% certainty, I can say that I’ve played Desert Bus more than any other human being on earth.

Biggest fear about driving for DB8:
I no longer fear the Bus, the Bus fears me.

If he was reincarnated as a fruit or vegetable he would want to be:
Durian as it has a built in defence mechanism.

To prepare for driving the bus he is:
Tossing trombones, jamming out to 1989, building my next MtG Commander deck all while slamming back the biggest brick of Blue Cheese you ever did see.

What symbol does your superhero cape have on it?
¶