Up first in this lot is a collection of hard to find Pinny Arcade pins. These include the Limited 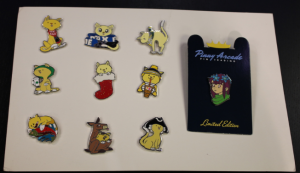 Next we have the Acquisitions Incorporated: Battle Royale cards. Used during the PAX East 2018 live show, DM Mike Krahulik continued his proud tradition of staunchly refusing to play Dungeons & Dragons and instead decided to make it into a battle royale game. These two decks contain equipment, resources and random encounters. You will also get a copy of Mike’s notes, allowing you to run the game for your friends, acquaintances, and enemies!

Thank you to Child’s Play Charity for the donation of this lot!

Donate $6.66 (or multiples thereof) until 2:45am PST for a chance to win this awesome prize lot!