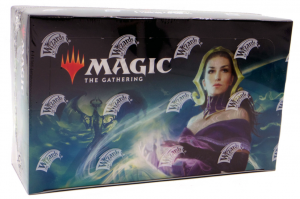 Nicol Bolas’s final plan has come to fruition. Liliana Vess leads the Dreadhorde, his army of Eternals, through the streets of Ravnica and its up to the Gatewatch and Planeswalkers from all over the multiverse to stop him. But Bolas’s plan doesn’t stop with an invasion. He plans to harvest the sparks of all the Planeswalkers with the Elderspell. With the fate of the multiverse at stake, will the Gatewatch succeed or will Bolas obtain the power to rule the multiverse? Find out in War of the Spark.

Donated by our friends at Wizards of the Coast, this special Japanese War of the Spark booster box features cards all in Japanese. The art, done by famed artists, including Yoshitaka Amano, reimagines all of the Planeswalkers in their truest form: anime. All 36 War of The Spark booster packs are included, and can be used to show off during your next trip to your LGS.

Donate $6.52, or positive multiples thereof until 3am PST for a chance to win! Make sure your donor account is set up right here!