In previous years we have given you the opportunity to be the Official Sponsor of our beer keg at the volunteer appreciation afterparty, however this year (much like Desert Bus itself) this event must be virtual, and James cannot drink a whole keg of beer on his own. So instead you have the chance to be the Official Sponsor of James’s 6-Pack of Beer for the Virtual Afterparty! The winner of this auction will receive a certificate recognizing you as such, and James will also mail you a Polaroid of himself drinking the beer during the afterparty! 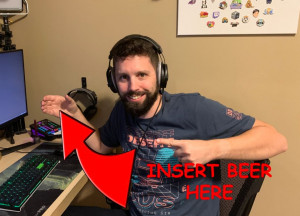 As with all of our auctions, the money from this will go directly to Child’s Play. James has to buy his own beer.

This auction ends at 10:00PM tonight!