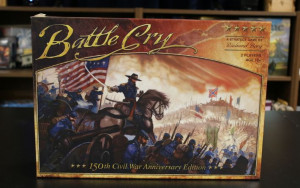 The Civil War was fought in ten thousand places. From Bull Run to Gettysburg, and from Antietam to Vicksburg. At Chickamauga, at Shiloh, and now at your kitchen table. Take control of either the Union or Confederate forces in 30 different scenarios in this tabletop wargame based on actual battles from the Civil War. But the outcomes are not set in stone. With your tactical ability you can turn the tide of battle and snatch victory from the jaws of defeat. Can you prove yourself a better general than George McClellan? Yes, yes you can. Everyone is a better general than George McClellan.