You have reached the end of Final Fantasy VI. You have beaten the boss! You rejoice! And then… Kefka unleashes his final form, and you realize you still have a fight ahead. 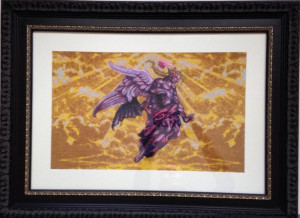 This spectacular cross-stitch piece depicts Kefka from Final Fantasy VI as he appears in the game’s final battle. The pattern for this piece was created using screenshots from the game. It was kindly donated to us by Diane Hamilton Siefker.

Donate $9.14 (or multiples thereof) for a chance to win this prize. We’ll run this donation drive until 1:45am PST.