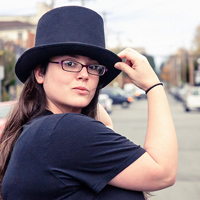 When not at Desert Bus, she can be found:
Being Dammit Liz!
I like to produce geeky events and attend way too many conventions. I enjoy video games that are not Desert Bus. Am I fully enjoying my new position as Event Design Manager at Wizards of the the Coast!

Special Skills:
I have a super secret special sexy dance.

She’s a total geek for:
Star Wars for sure!
Assassin’s Creed
Marvel anything

Biggest fear about Driving for DB8:
I have crashed the bus MULTIPLE times and I haven’t even been an “official” driver. I REALLY hope I don’t crash it this time…oh god…
Editor’s Note: Our official record of official records only credits her with 1 crash thusfar. Has she been cheating on us with another Desert Bus? Where are all these crashes coming from?

If she was reincarnated as a fruit or vegetable she would want to be:
Editor’s Note: No response. Does Dammit Liz have something against healthy living?

Doesn’t want you to know she listens to:
Spice Girls

To prepare for driving the bus she is:
I am playing A LOT of Borderlands Prequel… to get used to being in front of the TV for hours at a time.
I am taking the bus everywhere I go, not just because my car broke, but to really get into the mindset of the ‘bus’, you know?

What symbol does your superhero cape have on it?
gin & tonic (plus lime)- is that bad? That sounds bad.